Colin Wilson and The Occult 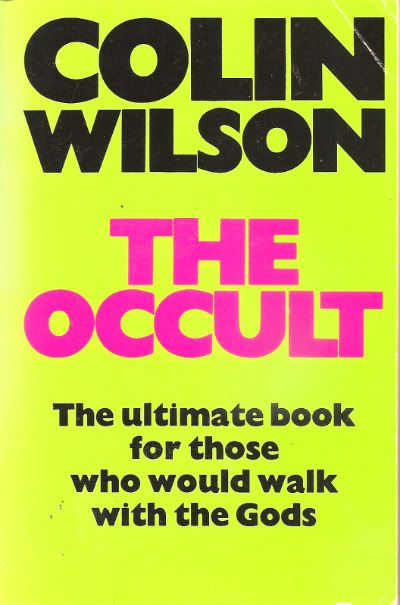 Back in the pre-Internet days, when the University of Georgia Library served as my Google, I stumbled across a doorstop of a book by Colin Wilson titled The Occult, its cover emblazoned with the words, "The ultimate book for those who would walk with the Gods." Being in my early twenties and both painfully insecure and painfully ambitious, I obviously had to read this.

The book turned out to be less a manual than a history and philosophical treatise. The first half consisted of an extended essay on something called "Faculty X." The premise: that the human race is evolving toward a point where people will have greater access to the brain's hitherto untapped capabilities--psychic powers, heightened consciousness, peak experience--and that so-called "occult" practices and phenomena are merely man's imperfect attempts to tap into these latent powers.

It's an appealing idea, and yet I found that first half of the book extremely slow-going. I may have skipped ahead to the second half, which was a different story altogether. This comprised nothing less than a comprehensive overview of the Western esoteric tradition, beginning with the first glimmerings of pre-historic time and carrying through to the 1970s. All kinds of intriguing and shadowy figures were brought to my attention: Pythagoras, Mesmer, Count Cagliostro, the Comte Saint-Germain, Daniel Dunglas Home, Madame Blavatsky, Gurdjieff, Aleister Crowley, and Wilhelm Reich. Wilson sketched these sometimes comically eccentric personalities with a deft mix of sympathy and skepticism, and proved himself a master at synthesis--collating the disparate threads of their philosophies into an unruly yet beguiling whole that did indicate forward momentum toward the elusive Faculty X.

The Occult is a weird and wonderful book, and I am immeasurably richer for having read it. My summary of the Faculty X theory (which sounds vaguely Marvel Superheroes-esque in my retelling) does not do it justice. No single book, save perhaps Siddhartha, has had a more sustained impact on my thinking with regards to the metaphysical.

To the general public, Wilson's best-known work is probably The Outsider, which does for the intellectual loner what The Occult does for the sorcerer. This too is a subject near and dear to my heart but I confess I was unable to get through The Outsider. Wilson had a tendency to sink into muddled, quasi-academic prose when pontificating on his BIG IDEAS. I suspect there is much of value to The Outsider, but I am not yet at the point in my life where I have the patience to assimilate it.

Until very recently, I tended to think of Colin Wilson as a guy who had pretty much figured it all out. It seemed a little baffling to me that he was not better known. Then I came across an audio interview and his relative obscurity suddenly began to make sense, for in this recording Mr. Wilson displayed staggering arrogance coupled with a complete lack of self-awareness. He held forth on his contemporaries (Anthony Burgess among them) and found them lacking in relation to his own brilliance. He spun a tale of Vivien Leigh having made a pass on him ("she was a nymphomaniac," he said blithely), and told of various other fantastical brushes with celebrity in which he, not the celebrities, was the object of desire and adoration. He concluded that his critics simply could not comprehend his genius. Over the course of 45 minutes I almost lost all interest in Colin Wilson.

Almost. His passing last week at age 82 has brought the writing back into relief. I can't speak to the overall body of work (Wilson wrote something like 100 books, including several novels), but with The Occult and some of his other writings on the paranormal, he set my imagination alight. Underneath the oversized ego, there may not have been genius, but perhaps there was a little bit of magic.