I am thrilled to announce publication of my new eBook We Can Be Heroes: The Radical Individualism of David Bowie.

"Robert Dean Lurie is a rock and roll writer in a Tertium Quid groove: he is lucid and thorough and provocative, capable of soaring flights of fancy yet grounded and wise. In We Can Be Heroes, Lurie invokes Burroughs and Nietzsche, Orwell and Rand, Aleister Crowley and Edmund Burke (Crowley and Burke?!), and the result is a song of David Bowie that rings euphoniously, cacophonously true."

--Bill Kauffman, author of Dispatches from the Muckdog Gazette

"Comparisons to punk or Prince are easy enough, but any book on Bowie that opens by likening his under-appreciated band Tin Machine to Howard Roark has my attention. By the end, we've learned the revealing philosophical origin story of this musical "Superman," with cameos by Nietzsche, Aleister Crowley, Elvis, and the other acknowledged influences who separated Bowie from the herd of common homo sapiens and made him something unapologetically higher."
--Todd Seavey, author of Libertarianism for Beginners

Utilizing song lyrics, interviews, biographical resources, and commentaries from a diverse range of writers and artists, We Can Be Heroes follows the strong thread of radical individualism running through David Bowie's work and life, exploring its parallels with the ideas of such diverse figures as Friedrich Nietzsche, Jack Kerouac, William S. Burroughs, Ayn Rand, and Aleister Crowley. Bowie's legacy is also compared with that of his successors, such as Madonna and Lady Gaga, a contrast that demonstrates that his philosophical foundation, largely absent from the work of these and other more image-oriented performers, has guaranteed his body of work the sort of longevity usually only accorded to authors and visual artists. Bowie kicked off a one-man revolution in self-actualization. This book examines its substance and implications.

A must-read for fans of Bowie, as well as passionate proponents of individualism.

We Can Be Heroes is available exclusively from Amazon.com and can be read on any device via the free Kindle app.

An excerpt from the book can be read here. 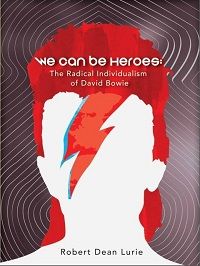